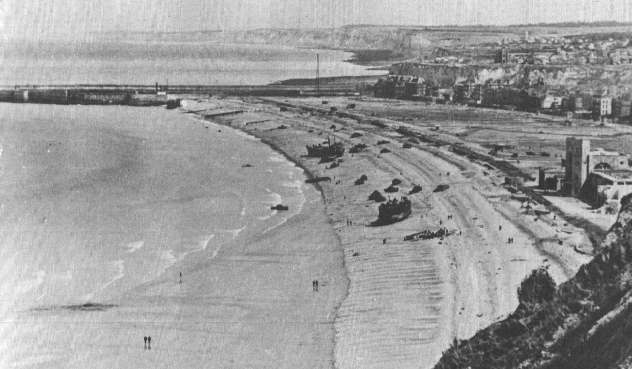 View of Red Beach, Dieppe looking West towards the harbour. 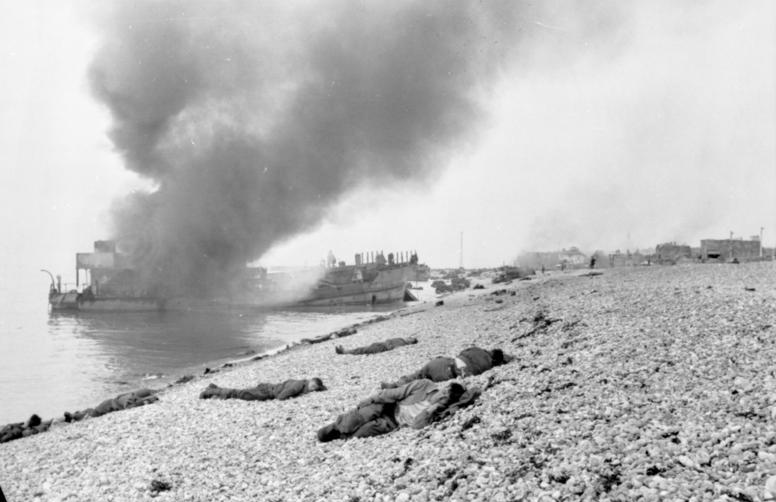 View of White and Red Beaches in front of Dieppe, August 1942.

The strategic situation was grim with the Soviet Union pushing for a second front and constant difficulty resupplying England by ship through the North Atlantic due to German submarines.

After a successful commando raids in Norway in 1941 and on the French port of St. Nazaire in March 1942, Lord Mountbatten, Chief of Combined Operations for the Allies, planned a more ambitious raid on the English Channel coastal port of Dieppe, France. This raid was regarded by the Planning Staff as an indispensable preliminary to the full-scale invasion of France. Topographically, Dieppe was a very difficult challenge with a coast of towering, unscaleable, sheer chalk cliffs rising from the water's edge. Adding to these natural defences were the coastal heavy gun batteries and other reinforced defences erected by the Germans during the past two years of occupation. The raid was composed of more than 6,000 soldiers, sailors and airmen, of which around 5,000 were Canadian. 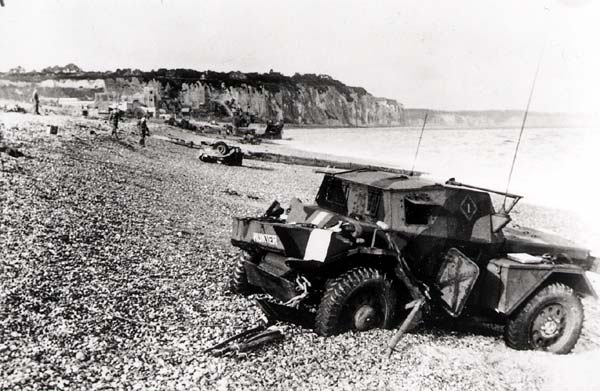 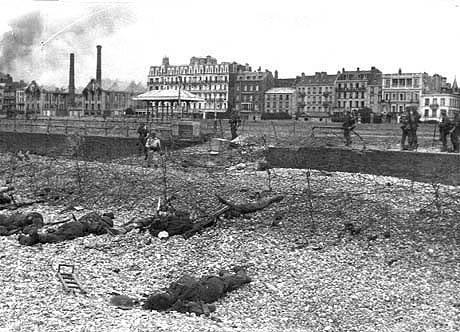 Casualties on the beach in front of Dieppe, August 1942.

The Essex Scottish boarded ships at ports at Southampton, Portsmouth and Newhaven, England on the evening of 18 August 1942. At 0300 hours (19 August) all personnel boarded assault landing craft. By 0500 hours, the air attack on Dieppe had become quite heavy and ten minutes later the assault craft received the first fire from shore. At 0525 hours the assault craft touched down on the shingle beach of Dieppe, code-named RED BEACH.

The troops rushed out of the assault craft and up the beach to the first and second barbed wire obstacles. At this time, the enemy began bringing down artillery, heavy mortar and machine gun fire on the beach and esplanade, causing a considerable amount of casualties. By 0545 hours somewhere between 30% and 40% of the Essex Scottish personnel were either killed or wounded.

Sufficient of the Essex Scottish had now reached the seawall to attempt scaling it and attack the pill boxes on the esplanade. Almost all of the troops assaulting the wall in three attempts were killed or badly wounded. Two groups of soldiers led by Company Sergeant-Major Stapleton and Lieutenant Scott managed to cross over the seawall, make their way across the Promenade and reach the buildings of the town but could not relieve the ever-increasing pressure on the remainder of the Regiment at the seawall.

The Essex Scottish were unable to continue organized fighting as by about 0630 hours they had suffered at least 75% casualties. Offensive efforts by the remnants of the Essex Scottish continued for some hours by getting ammunition from the casualties until finally, about 1030 hours, there was practically no ammunition left. Throughout the course of the operation limited support had been available from the air and the sea. Direct fire support was provided by the 14 Canadian Army Tank Regiment (The Calgary Regiment). Their tanks became bogged down in the shale on the beach but they did provide direct fire support until their ammunition ran out or the tanks were disabled.

Somewhere about 1100 hours, aircraft laid smoke on the waterfront and landing craft came in to evacuate the troops. An effort was made to get those unhurt and the wounded who could be moved into the landing craft but the enemy fire destroyed so many of the craft that very few troops got off the beach.

The Essex Scottish had embarked with 553 officers and soldiers the evening of 18 August. By the evening of 19 August only 51 would return to England, some wounded, leaving the remainder in France, who had been either killed, wounded, were missing or had been taken prisoner.

The Rest of the War

Back home the casualty figures from that morning dramatically touched virtually every family in Windsor and Essex County as they lost fathers, sons, brothers, grandsons, cousins, nephews, neighbours, school mates, work mates and friends. The very costly lessons-learned during this raid had a major impact on the overwhelming successes of the D-Day landings in Normandy two years later. This Raid could have been the death knell of the Regiment but it was rebuilt and went on to become a key contributor in the major battles of 1944 and 1945 though Caen, Falais, Dieppe once again, the Scheldt, the Hochwald Forest, Groningen, and into Germany. 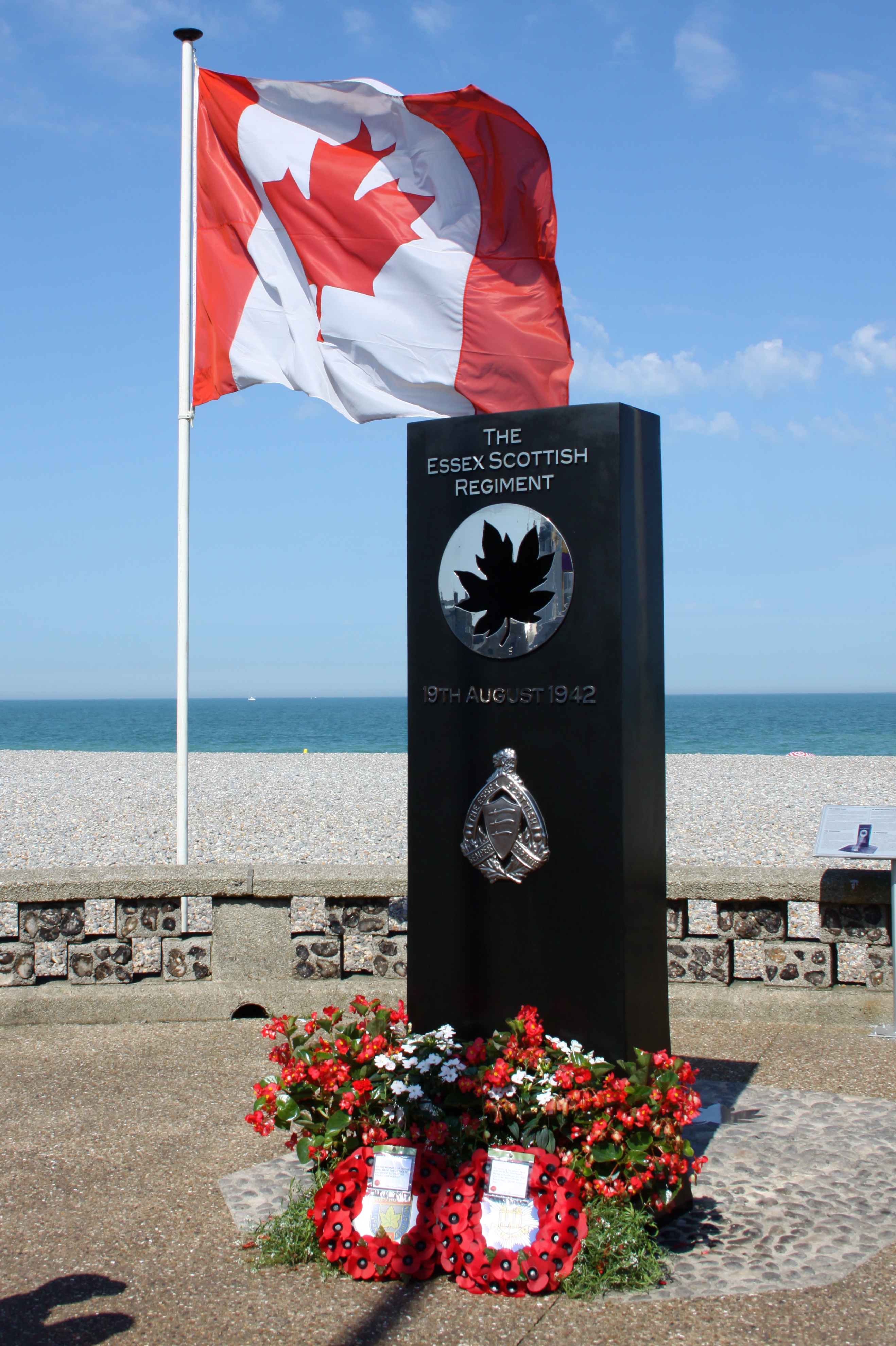